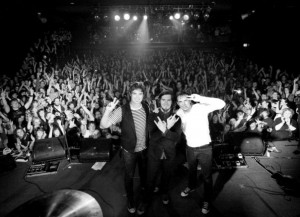 The Melbourne power trio formed in the back of a record store in 1999, the band quickly rose to prominence through the strength of their energetic live shows and acclaimed recorded material. Hard working and independent, the band self financed numerous EP’s and albums, including the classics ‘Memoirs of a Common Man,’ ‘Aurora’ and ‘Monuments’ as well as playing nearly 1000 live shows nationally and internationally with bands such as Jimmy Eat World, Unwritten Law, Millencolin, MxPx, Jebediah, Pacifier, Missy Higgins, Motor Ace, Bodyjar, Midnight Oil and Eskimo Joe as well as playing on the bill of such well respected festivals as Vans Warped Tour, M-ONE, Homebake and the Falls Festival.

In celebration of the band and its amazing career Antiskeptic decided to commemorate their extensive journey by playing a series of shows including a final one on September 20th, 2008 at their hometown in Melbourne’s legendary venue The HiFi Bar.

Every moment of this incredible live show was completely captured here on this not to be missed special DVD/CD titled ‘Goodbye Goodnight Live at The HiFi 2008’! The good news is it’s out now in all it’s glory!’