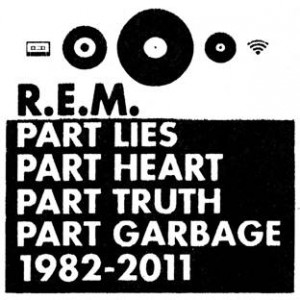 NEW SONG, “WE ALL GO BACK TO WHERE WE BELONG”

After R.E.M. ignited the blogosphere on September 21st with the news that they had decided to “call it a day as a band” via a statement on their website, the beloved band have announced that they will release their final album, R.E.M., Part Lies, Part Heart, Part Truth, Part Garbage, 1982 – 2011, on Warner Bros. Records on November 18th, 2011. The album is a 40-song career-spanning retrospective that collects, for the first time ever, songs from R.E.M.’s entire back catalogue, including the pioneering American band’s years on both the IRS label (1982 to 1987) and Warner Bros. Records (1988 to 2011). A brand-new song, “We All Go Back To Where We Belong,” goes to radio and will be available for sale on October 18th.

“Working through our music and memories from over three decades was a hell of a journey,” says Mike Mills of choosing the songs that appear on R.E.M., Part Lies, Part Heart, Part Truth, Part Garbage, 1982 – 2011. “We realized that these songs seemed to draw a natural line under the last 31 years of our working together.”

In addition to liner notes written by band members Berry, Buck, Mills, and Stipe, the album also features three new songs that R.E.M. finished after they completed their last album, Collapse Into Now: “A Month of Saturdays,” “We All Go Back To Where We Belong,” and “Hallelujah,” which were recorded over the summer in Athens with Accelerate and Collapse Into Now producer, the estimable Jacknife Lee. The band came roaring back with those two albums in the last two years, achieving some of the best reviews of their career and enabling them to go out at the top of their game.

Disc 1:
Gardening At Night
Radio Free Europe
Talk About The Passion
Sitting Still
So. Central Rain
(Don’t Go Back To) Rockville
Driver 8
Life And How To Live It
Begin The Begin
Fall On Me
Finest Worksong
It’s The End Of The World As We Know It (And I Feel Fine)
The One I Love
Stand
Pop Song 89
Get Up
Orange Crush
Losing My Religion
Country Feedback
Shiny Happy People

Disc 2:
The Sidewinder Sleeps Tonite
Everybody Hurts
Man On The Moon
Nightswimming
What’s The Frequency, Kenneth?
New Test Leper
Electrolite
At My Most Beautiful
The Great Beyond
Imitation Of Life
Bad Day
Leaving New York
Living Well Is The Best Revenge
Supernatural Superserious
ÜBerlin
Oh My Heart
Alligator_Aviator_Autopilot_Antimatter
A Month of Saturdays
We All Go Back To Where We Belong
Hallelujah